Working as a Web Developer: Salaries, Settling, and Swag

If you’re looking to break into the tech scene and become a full-time developer, it’s likely that these questions are at the top of your mind: What is the typical web developer salary? What can I consider fair? What should I look for in a web developer job description? How can I know a position is good for me?

First, let’s tackle the age-old question: How do salaries for developers work?

It’s important to note that developer’s yearly salary growth and future salary expectations are compressed into a much shorter timeline than the vast majority of other jobs. This means that while you might not start out as high as you had hoped, your earning potential after the first year on the job usually increases significantly and quickly.

There are, of course, differences by region, including the fact that San Francisco is a friendly place for you if you’re starting a career as a web developer.

What’s behind these numbers?

At its core, money = a currency for which you are able to trade your time and energy. Following the basic rules of capitalism, the supply and demand of a set of specific skills and experiences determine how valuable a person’s time is. The more valuable their time, the higher the rate they can command in an open market.

In general, if you’re in an industry where the demand for your particular skills and experience outweighs the supply, you have leverage. For example, in ancient civilizations, only a small fraction of the population could read and write, and many people needed their services. Scribes had the leverage because they were in high demand, and they were treated as the upper class. Fast forward to today when literacy is the norm rather than the exception, other skills and experiences are what give a person leverage.

Today, if you’re living paycheck-to-paycheck, making more money means a higher quality of life. As a former broke college student, living in a lousy apartment with other people, struggling to pay bills, and eating chicken nuggets for every meal, I more than fully understand the toll financial problems can take on someone’s quality of life.

So then what does being in-demand mean for you?

While the potential for a high salary is all well and good, there are ultimately only a few uses for money in the world, and once you’re compensated beyond a certain threshold, it has a minimal impact on your quality of life and happiness.

The point is, once you’ve taken care of your basic human needs, have the support you need to afford paying for services, and enough money (and time off) to enjoy vacations, all of your remaining cash goes to buying random stuff.

Will a $4,000 couch from Crate and Barrel really make you happy? Probably not. In fact, not even Employee Bear, the world’s most valuable Beanie Baby, can make you happy.

Instead, the #1 thing that will make you happy is what you’re doing and who you’re doing it with. This truth has stood the test of time. Do you feel challenged and continue to grow each day? Do you work on a team that is supportive? Do you feel like you’re making a difference in the world? Are you excited to wake up in the morning and tackle the next day at hand?

After graduating school, I got two job offers to work as a software engineer:

I took the job at the startup, sacrificing short-term cash, but using the early part of my career when I was hungriest and out to prove myself in the world to my advantage. It’s a decision I have never regretted.

When you’re spending your entire day doing something you enjoy doing, the cash is just a bonus. Being in a fulfilling career is something that will give you much more than the feeling that you need to keep up with the Joneses– instead living your life on your own terms.

If the only incentive you have to become a software engineer is an upgrade in your pay grade, your ambitions will only take you so far.

Tim Ferriss talks about how doing the unrealistic is easier than doing the realistic. The fact is, making a meaningful change in your life will require work, sacrifices, and a lot of time. If your goal is mediocre (just looking for a few extra dollars in your bank account), you likely don’t have the amount of grit you’ll need to push yourself outside your comfort zone and to the level you need to in the process of learning to code for a living.

Rest assured that the web developer career path is an exciting one. At the entry level, your salary will support a healthy quality of life, in addition to engaging and intellectually stimulating work.

And down the line, after garnering 5+ years of experience, it’ll become clear how broken the supply and demand of senior developers is, in your favor. Cold outreach from recruiters sharing a list of potential jobs they want to connect you with that pay an annual salary ranging from $100,000-$200,000 (with the majority in the $130,000-$150,000 range) will happen so frequently you’ll stop responding and start complaining to your developer friends. 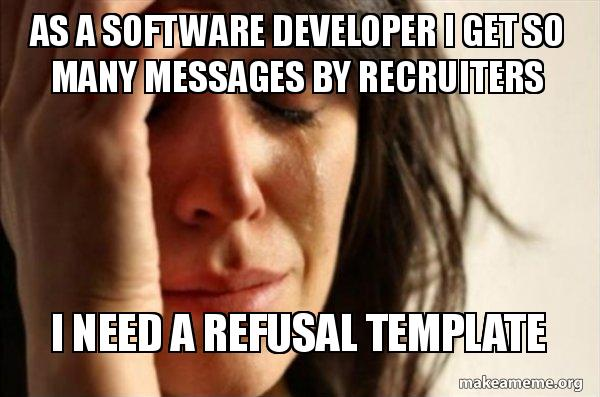 If you follow your passions – and avoid doing things you hate – whether or not things work out, you will have no regrets. Most of all: screw that flat-screen TV some rich miserable guy traded his happiness for.

When looking for the right opportunity, prioritize the culture and atmosphere of the team, the opportunity to learn and be mentored, and the exposure to new technology over the Benjamins. You can live without the trinkets in 2016, and the 2020 version of yourself will appreciate the decision.

4 replies on “Working as a Web Developer: Salaries, Settling, and Swag”